Biggest reason I enjoyed it: the movie didn’t feel terribly James Bondish (judging by the three I’ve seen and haven’t liked: Casino Royale, Quantum of Solace, and the appalling Tomorrow Never Dies, which puppetted the corpse of a plot around for two hours).

Scarred and scruffy, Bond doesn’t exude nearly so much of his traditional cold, erotic charm; he’s frequently very undapper and even downright homespun. And say hello to yet another hero who spends a good deal of the third movie getting beat up or performing subpar at best. (Another Dark Knight before he rises, anyone?) Bond can’t shoot straight, his body’s a wreck, and he’s pretty much on his own without all his deux-ex-machina gadgets. The result of all this is that we care more. Bond is infinitely more sympathetic. Nice suits and slick stunts and sweet guns are worth zip if zip is how much the hero is worth to the audience.

The story itself repeatedly sidesteps the cliches of its genre with lots of unconventional action sequences, camera angles, scene cuts, unlikely backdrops, etc. Sometimes this was at the expense of smart, logical choices from the characters who frequently acted out of character, but hey, at least the writers tried. (More on bad logic later.)

Bad guy: another favorite. This makes the second time I’ve seen Javier Bardem steal the show with horrible hair. But unlike Chigurh (and unlike most villains, really), Raoul Silva actually has a compelling backstory, which I’ll talk about in a second. None of this would work, however, if Javier didn’t bring it all to life. Still not a ninja at the English language, Bardem had the script translated into his native Spanish so that he could study his character better, with truly jeepers-creepers success. Mannerisms, accent, gestures, personality — he is so much more than a bad dude with a mean plan.

Another strong point: the parallels between Bond and Silva. Silva is Bond’s mirror image — same, yet different, which fulfills the “reflection” imagery in the opening credits where Bond shoots not only at his own face in three different mirrors, but also at his own shadow at his feet. Ten minutes into the movie, it’s more than hinted at that Bond will spend most of the time chasing his twin.

Both were good agents — M’s favorites, in fact. Both were betrayed on at least some level, and for similar reasons: giving up the rebellious Silva would regain six agents, while risking Bond’s life would save dozens of others. Both men were given up for dead. But that’s where they part ways. Bond was shot in the line of duty; Silva tried to take his own life in a moment of weakness. Bond leaves bitterness behind in order to protect his country and his commander, while Silva is living heart and soul for revenge. Playing with death (including his own) is Silva’s hobby. What is Bond’s? Death…and resurrection.

Now for the negative. I know we swallow a lot when it comes to Bond flicks because, well, it’s Bond, and it’s all just part of the magic, but there were a few nonsensicalities that were so far-fetched, they broke that magic. Hydrogen cyanide melting your teeth and sizzling your guts and you don’t die? And excuse me (minor detail here), but falling into a frozen pond would kill you in a matter of seconds — if not the drowning, then the shock and hypothermia afterward. That kind of water feels like it’s boiling, it’s so cold. I know — I’ve been in it.

Besides that, you could really feel the storytellers tugging those puppet strings on a number of plot points:

1) WHY wouldn’t Bond just wing the assassin Patrice before Patrice actually shot some possibly very innocent guy through the window? Oh…because the movie would be over too quickly if Bond found out from Patrice who the big boss was, and besides, this way he gets to meet the sexy chick with the Beretta on her thigh and then have a pointless rendez-woo in the shower “feeling naked without it.” (Not to hate that cheesy line to the ends of the earth would be to acknowledge that you just don’t have any intelligence to insult.)

2) WHY would Bond wait until after Silva has shot Her Hotness to double-oh-seven his way out? The gun to his head (which he smacks away) and the half-dozen agents (whom he kills in about five seconds) are the same gun and the same agents that just “forced” him to watch Severine die. The kindest thing to assume is that the storytellers, in their enthusiasm to have their villain shoot the girl and get Bond really ticked off, simply forgot their own hero’s skills for a minute. “You’ll forgive us our miniature brain freeze; there was only one small casualty.” The not-so-kind alternative (and the one I’m going with) is that the storytellers were done with Severine, so off she goes. “She has to die, because there has to be another Bond girl, so what’s the best way to do it?” Apparently, Silva isn’t the only one who kills innocents whenever it suits his plan.

3) WHY would a hyper-genius hacker brainiac plug Silva’s computer into the MI6 mainframe? Answer: he wouldn’t. 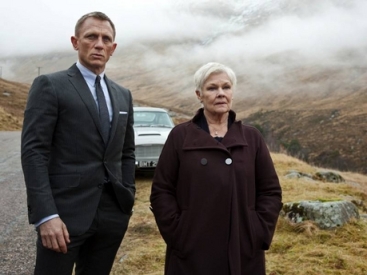 4) WHY would Bond take the boss of MI6 to an abandoned mansion in Scotland with zero backup and not a single truckload of awesome guns to his name? M’s motivations are sublime because she finally understands her enemy enough to turn her own standards on herself: give up one person to save the world. But why does this have to be so top-secret? Why couldn’t Bond recruit just a couple crack shots to tag along? Why wouldn’t he stop for ammunition? Oh, right…so he can take down the bad guy and still be the underdog. So that M can die. So that Mallory can be the new M. So that we can all praise the movie for its emotional impact. Admirable ambitions all, but there are better routes than robbing Bond of his normal game plan finesse.

A final note: it’s really sad that a mere three Bond girls and two nasty scenes are a comparative relief. This is seriously the worst feature of the Bond stories: all the recyclable bed-bait. For one thing, in real life there would be consequences. You don’t just sin like that and not have it affect you — I don’t care how calloused and comfortable you get doing it. But it’s more than a lie. Despite all the hype, being the “next Bond girl” isn’t a compliment. It’s an insult. You’re as handy as a latex glove, and just as trashable. (Don’t like that image? Try a kleenex.) Bond is obviously troubled that Silva would set up his sex slave for a William Tell contest, but all the Bond girls ever are is target practice.

So, as far as Bonds go, this was a good one. Grittier action, less bed-romping, a complex antagonist, and a hero that is almost human. Oh, and I haven’t even mentioned Adele — the best Bond girl yet.