Gandalf’s death in The Fellowship of the Ring. Hacking the mast free and letting the sailor drown in Master and Commander. The lobby scene in The Matrix. The eerie underwater swim with the shark in Jaws. Tom Hanks rowing away from the island in Cast Away. Nine minutes running up the mountain at the end of The Last of the Mohicans. The opening credits to Star Wars.

Are we on the same track yet? If you’re thinking music, you’ve got it.

It probably isn’t an understatement to say that a film (when all’s said and done) is only as good as its soundtrack. Many a bad movie has been lifted up by a superior score (1977 could have been a very forgettable year if George Lucas hadn’t snagged John Williams), but if your brilliant story has subpar music, you better get down on your knees. And if your mediocre story (Troy) has anything done by James Horner, just get up. It’s no use.

Composers get paid what they do because without them, without the right score, there would be no story. Or there’d be a story, but it’d be lame, or we simply wouldn’t know how to take it. Silence can be used effectively (Carter Burwell didn’t make a peep until the end credits in No Country for Old Men ), but it can also leave us scrambling for guardrails–anything to tell us how to interpret what we’re seeing or to tell us where we are in the narrative arc (Good Night and Good Luck). 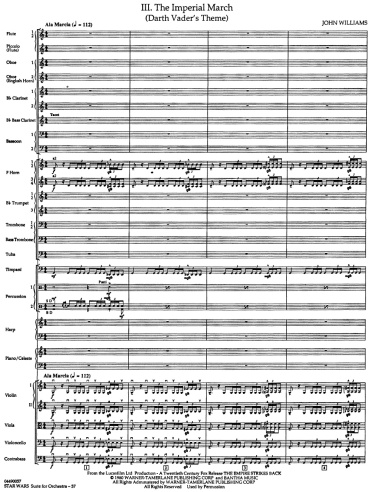 Music shapes and glorifies. It’s the number one magical element that can make (or break) any scene in a movie; it’s one of the most important post-production step that turns rough, mundane footage into that miracle that gives us goosebumps.

In fact, music all by itself will tell us how we should interpret a particular scene. A girl’s walking down a busy New York street with shopping bags under her arm. Creepy music, it’s a thriller. Serious, it’s a drama. Silence, it’s an even more serious drama. But a radio song? It’s just Anne Hathaway in The Devil Wears Prada and we all feel a lot different.

In other words, the music wins. It’s just one element of hundreds in a movie persuading you to feel what the director wants you to feel; you’ve also got action, dialogue, setting, lighting, lens filters, special effects, slow motion, facial expressions, story grip, the fact that your roommate likes it–countless different forces pulling you in (hopefully) the same direction. But none are as powerful as the soundtrack. Maybe it clashes, maybe it irritates or distracts or detracts from the scene, but no matter what, in a tug-of-war between story and music, for better or for worse, the music wins. The fate of the movie is in its hands.

You know the mirror scene in Harry Potter and the Sorcerer’s Stone? I deleted the audio track (sorry, the dialogue had to go, too) and subbed in John Williams’ “Padme’s Ruminations” from Revenge of the Sith (you know, the part where Padme and Anakin make Force connections during the giant flaming orange sunset) fading into “Discovering Hans” from Munich (also John Williams). You can see the difference for yourself. If you never felt like little Harry needed a hug, you’ll feel that way now.

But the real difference comes at the end of the movie when the kids pile onto the Hogwarts train. Happy, right? I’d already seen the movie half a dozen times. I knew the ending was happy. I’d felt happy watching it. But when I again swapped Williams for Williams and set the scene to “End Credits” from Munich, I felt like the kids were leaving forever. Maybe to a concentration camp.

Sure, I’m no techie, so it’s a little rough. But you get my point. No need to shoot an alternate ending, just rewrite the score and congratulations, your adorable kids movie is now a tragedy.

I have no idea how much John Williams makes. (The internet is mysteriously mum on the matter.) But apparently he’s worth $100 million. Hans Zimmer is worth $90 million. I’m guessing James Newton Howard isn’t too far behind.

My fellow movie-lovers, they are worth a lot more than that.

P.S. It goes without saying that I do not own the copyright to any footage (video or audio) you just enjoyed.

One thought on “The Music Wins”