Why did I even bother to watch the new Hobbit movie last week? Because for some reason, whenever that bumptious philistine Peter Jackson makes dirt, I always have to taste it in order to say, “Yep. Dirt.” Well, okay, in all fairness, the first Hobbit wasn’t complete trash (I tried mightily to give it two thumbs down and failed), and neither is the second. You heard me: The Desolation of Smaug is not a disaster on all levels. Just most of them. (Kinda like an orc’s face isn’t as ugly as it could possibly be.) It scores the same precious few hit moves and repeats the same type of offenses as the first film only this time much, much worse, contorting itself into PJ’s most epically childish burlesque to date and the clutziest piece of bad fan fiction I’ve ever seen.

My sisters told me I should write a positive review before I wrote a real one (something about a charitable mindset), but I replied that it would quickly turn sarcastic. Nevertheless, the good stuff includes:

1) Bilbo. Martin Freeman is the one single reason I can honestly, thoroughly enjoy snatches of this farcefest, though he was curiously supplanted (screentime-wise) by a certain starry-eyed dwarf whose love life never shows up even in Tolkien’s footnotes of the appendices or the postscripts of his letters, but who knows? Maybe the idea of a dwarf and elf hooking up is so un-Tolkien, that’s the reason he never included it, which explains why Peter Jackson felt at perfect liberty to do it hisself. 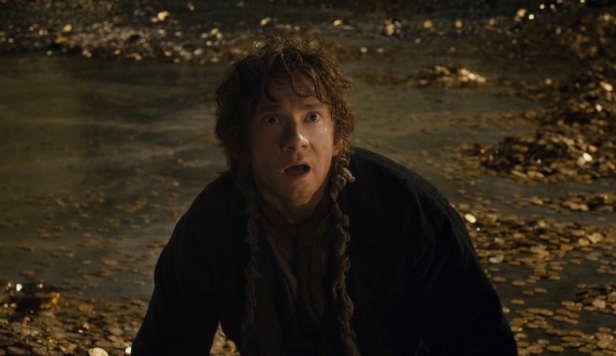 2) Newcomer casting, most notably Luke Evans (Will Turner with more gravitas) and Benedict Cumberbatch (whose voice alone could wrest an Oscar). Orlando Bloom, two years older than his “dad” and a dozen years older than his future self, also counts as a newcomer, and he was surprisingly mostly okay. Mikael Persbrandt, I’m sorry, but he was miscast, unless I’m mistaken that Beorn was supposed to amount to more than Wolverine on a bad hair day.

3) Almost everything produced by the consistently spot-on Weta Workshop: sets, costumes, armor, weapons, makeup, SMAUG (!!!)… just about anything you saw and marveled at (minus the Arkenstone, of course, which Tolkien says was “as if a globe had been filled with moonlight and hung before them in a net woven of the glint of frosty stars,” but which was here represented by a lightbulb in a milk jug). BUT. Like I said last year, Weta’s wonders are standard by now. How else are you going to spend millions of production dough?

4) A few top-notch moments–moments, not scenes–that almost convinced me I’d fallen into the pages of the book: walking circles in Mirkwood, waiting for the last light of Durin’s Day, the feeling of Laketown (minus some histrionics), discovering the treasure, Bilbo and Smaug’s shrewd repartee, and that’s really about it. Coming up dry.

Now for the misdeeds. As I mentioned, PJ’s offenses are the same in nature as those in the first Hobbit, but he’s cranked the volume way up. He doesn’t butcher a few key scenes and characters so much as he guts the story of nearly all the fairytale qualities Tolkien held most dear (real danger, intelligent fight scenes, charming humor, true valor) and force-gorges it on the exact brand of inane rubbish he so hated.

In fact, the film’s worst faults are the very transgressions which Tolkien rebuked back in the 1950s when another maladroit tried to translate his books to screen. Some of these apply so well to Peter Jackson’s work, it’s downright eerie. I already mentioned a few of these in my critique of the first Hobbit, but here’s another flyby:

“The failure of poor films is often precisely in exaggeration, and in the intrusion of unwarranted matter owing to not perceiving where the core of the original lies” (270). “I should resent perversion of the characters… even more than the spoiling of the plot and scenery” (275). “Vulgarization [is] less painful than…sillification” (257). The screenwriter has the tendency “to reduce and lower the tone to that of a more childish fairy-tale” (272). “He has cut the parts of the story upon which its characteristic and peculiar tone principally depends, showing a preference for fights” (271). “He does not read…. It seems to me evident that he has skimmed through the [book] at a great pace, and then constructed his [story-line] from partly confused memories, and with the minimum of references back to the original…. I feel very unhappy about the extreme silliness and incompetence of [the writer] and his complete lack of respect for the original (it seems willfully wrong without discernible technical reasons at nearly every point)” (266). “I would ask them to make an effort of imagination sufficient to understand the irritation (and on occasion the resentment) of an author, who finds… his work treated as it would seem carelessly in general, in places recklessly, and with no evident signs of any appreciation of what it is all about” (270).

Exaggeration. Unwarranted matter. Perversion of characters. Sillification. Fights. (And fights, and fights, and fights.) These are precisely Peter Jackson’s calling cards. Listing all examples of any would take longer than it took him to commit the horrors in the first place, but a few are too egregious to ignore:

Just who is that fat, bulbous-headed version of Strider skulking in the corner of the Prancing Pony anyway? And Bilbo’s off-the-cuff ditty about the spiders–does PJ even know he left out Tolkien’s clever uses of Attercop, Lazy Lob, and Crazy Cob, all playful variations of Anglo-Saxon words for spider? Then there are the absurd battle sagas featuring Gandalf’s preposterous patronus charm, Legolas hop-scotching from dwarf noggin to dwarf noggin, a spectacularly unbelievable barrel ricocheting like a bewitched bludger, and a mountainous pile of implausibilities in Act III as the dwarves (cowards in the book, ambitious idiots in the movie) take on a strangely nonlethal dragon with a slew of giddy traps and tricks and utterly nonsensical gold soup.

By the end, my eyes were sore from rolling them. Even when I covered my face to protect my innocence from that thing, that disturbing, bilious thing between Tauriel (who?) and Kili (why?)–even then, my eyes were on a perpetual spin behind my fingers. And I haven’t even mentioned the music. Howard Shore has produced some of my all-time favorite songs with the LOTR and both Hobbits, but he more than matches them with a tedious score cartoonishly outlining every heartbeat of the film. Seriously, there are moments where the entire string section emits disharmonious squiggles for every passing emotion on every dwarfish face.

In the end, Peter Jackson is the greediest little dragon of them all. He saw something he liked and he took it and twisted it–all in the name of devoted fanship, of course–and is now sitting on his heaps of gold: a clumsy, conceited, and hilariously unrestrained ignoramus who loves his own gauche pomposity more than he does good art.

On the other hand, we all knew he was going to ruin the book, so why should we care? Shouldn’t we just mentally separate the book from the movies and love each for what they are? Impossible. People talk about “Tolkien purists” as though the dichotomy is between the nitpickers who like their Tolkien straight, and the relaxed, sanguine folks who like their Tolkien mixed or something, but that just isn’t so.

Bottom line, if you love Tolkien, if you truly love his stories that “pierce like swords and burn like cold iron,” then you must hate these movies. Not every second or every inch of them, but at the end of day–hate, yes, hate. Why? Because they are a false image, a broken mirror, a silly-puttied mockery of one of the greatest adventures ever penned in the English language.

If you really love Tolkien, then to this second vulgar, fatuous insult against his masterpiece you must say with him, quite simply: “Why? It’s not in the book.”

5 thoughts on “The Hobbit: The Desolation of Peter Jackson”