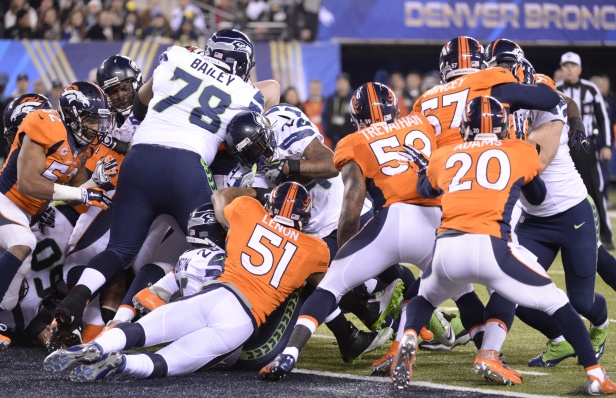 I threw a perfect spiral when I was ten years old but that fact can be misleading, mostly because I haven’t held a football since but even more mostly because I’m not quite sure what a football is for. Historically, my interest in sports, period, has topped out at “Hey Dad, what color do we want to win?”

Before this weekend, you could tip my brain and the only three things that would pour out was the touchdown and the fact that everyone wants touchdowns and I’m guessing that that wasn’t a touchdown. Oh, and here tumbles out the national anthem. Now my brain is dry.

But then, on my own volition, I watched Remember the Titans on Saturday night and the entire Super Bowl and all the commercials (I’m sick of yogurt) and even the halftime show on Sunday and I’m realizing that lightweights should really ease into these things. Now that I’ve OD’d on football, I’m here to share my wisdom.

Settling into a warm, stuffy room crowded with people whose collective football knowledge thundered like Niagara around something much smaller than Niagara, I simply tried to time my snickers so that people would recognize (and appreciate) when I understood what was going on. Like when someone said “I hope there’s not another power outage” and I had to fight a guffaw that actually meant “I TOTALLY GET THAT I REMEMBER LAST YEAR IT WAS THE ONLY THING I UNDERSTOOD.”

I kept my ears open. I’m really good at learning things on the go and never exposing my ignorance. At all. For instance, one thing I almost said out loud but managed to short-circuit the brain-to-mouth connection just in time: “So, is this college football? Wait, Peyton Manning is 37. Never mind.”

Someone said “shotgun formation” and I thought about all sorts of things like awkward weddings, the fact that bean bag rounds are awesome, and that I should really get a 12-gauge—oh, hang on, did they just do something with that shotgun formation? Because I missed the shooting. But I said nothing. Nor did I smirk when one of the players got sacked, because, really, when someone loses their multi-million-dollar job, it’s no laughing matter.

I admit I should probably go easy on showing off my knowledge. During the first ten minutes of the game or so, I intelligently inquired as to the absence of Russell Wilson, adding (for dramatic effect), “Isn’t he the QB?” (QB = quarterback.) The college guy next to me looked like I’d just asked him if he still wore footed jammies to bed, and replied: “They’re on defense.” I had to resist a face-palm. Oh. Right. Defense. Of course. How could I not have deciphered the undecipherable muddle of muscly shoulders sardined together in the middle of the field. Besides, if the best defense is a good offense, why wouldn’t you get your QB out there to defend, um, whatever you’re defending?

I will also admit there are still those moments when my Christian charity gets the better of me and I say things such as, “Aw, I hope the Broncos get one point.” Someone pointed out that it isn’t possible to score just one point, which doesn’t even make mathematical sense. Football apparently really doesn’t like to count by ones unless it’s adding a one to some other almost equally small number, like six.

Being football savvy is obviously a social plus, especially since, as I writer, I’m really excited about all the new metaphors in my playbook. Like…hang on, let me look up the technical uses of “shutout” again…Oh, right. Like “You’re such a shutout…Or you’re in a shutout…Or life is shutting you out…Or something.” I also find myself wandering into strange and horrible puns like, “Peyton used to play for the Colts, but now he plays for the Broncos. I guess he’s into horses.”

When my boss tells me I’m going to be the running back (two words, no hyphen; I checked) on a particular project at work, I no longer have to resist the wide-eyed, I-grew-up-with-four-sisters-and-none-of-us-know-how-to-throw expression that freezes onto my face when I’m not looking. Instead, I’m going to get up and run into the nearest wall and it will melt. And then explode.

I now also feel licensed to grab people around the knees and pitch their noses into the ground if they’re heading in a suspicious direction or have something that should be mine—like the TV remote or the last brown M&M. Speaking of throwing things, I’m totally going to start dropping napkins or paper towels or heck, maybe ever tearing off a corner of my shirt and throwing it at their feet whenever my roommates cheat in an argument, which is often, meaning always, so I should probably stick to napkins.

Confession: there are still a couple things I don’t quite understand—like Bruno Mars, or where on earth some of those shirtless guys were cleverly contriving to clip their mikes since the best spot on stage was deep inside Bruno’s head of hair and there happened to be only one of those. Also, I’m a little fuzzy on who or what a “tight end” is and it doesn’t help that the word conjures up images of tight uniforms and hence I think a “tight end” can refer to any player on the field. But I will still find some way to use it in a metaphor and it won’t be the tiniest bit embarrassing.