Civil War isn’t the best Captain America film, but it is certainly the best Avengers. With the movie’s emotional fulcrum bridging multiple characters (leaving only a fraction to Steve Rogers) and the greatest character arc belonging to Tony Stark, Civil War can’t be called a Captain America film at all—but that’s the worst you can say about it. This was a solid sequel, a near perfect blend of Winter Soldier’s gravitas and the first Avenger’s fun and games, and I couldn’t be happier that it’s setting the summer blockbuster season on fire.

Before we get started: spoilers below.

Temptations: Too Big, Too Boring

Undoubtedly, the film’s most surprising success is simply not being lame. And with a perilously large cast (almost double the size of last year’s Avengers: Age of Ultron) and a dubious plot (already abused once this year in Batman v. Superman), lame was certainly an option.

You’ve got Captain America, Falcon, Bucky, Scarlet Witch, Hawkeye, and Antman (Team Cap) against Ironman, Black Widow, War Machine, Vision, Black Panther, and Spiderman (Team Ironman). Too crowded? Probably. But so is Thanksgiving, and you don’t necessarily want anyone (or the mashed potatoes) to leave. And where Ultron fumbles around and drops almost everybody, Civil War deftly juggles its heroes with gratifying neatness. Everyone adds their own special something to the story—however small their moment to shine—and spouts off at least one mouthful of delicious one-liners in the middle of some terrific sparring, which is half of what the Marvel movies are all about.

Then there’s the civil war itself. Tricky, sticking the landing on this one. You need a catalyst that plausibly sets battle-bonded allies at each other’s throats, plus individual motivation for a dozen players, and the audience needs to enjoy itself throughout (this is a summer movie after all—not an Oscar contender).

Civil War defies the odds and nails everything.

Freedom vs. Safety in Chains

I was afraid the whole movie would be Team Cap and Team Ironman duking it out in ponderous, mind-numbing fights, but the bulk of the movie is spent setting up the conflict while the centerpiece brawl is essentially a giant family reunion with epic rough-housing; nobody wants to seriously injure anybody else. Though the battle turns serious in Act III (as it must), nobody in their right mind willingly pulls out all the stops.

As for the fault line that ultimately tears the Avengers apart, the Russo brothers repeated their successful strategy from Winter Soldier and picked a critical issue bound to resonate with every American with their eyes open in 2016: the age-old debate around safety versus freedom—and the question of whether freedom is not, indeed, the ultimate safety.

On one side you have the timid, lazy, short-sided, hyper-emotional urge to pass the controls to the government because bad things happened; on the other you have the desire to retain personal freedom by maintaining personal responsibility. Both sides are presented powerfully and fairly. Every character has their reasons for taking a particular stance that are 100% consistent with who they’ve been in all the Marvel films to date—especially Stark and Rogers, the spearheads.

Tony Stark doesn’t typically see the world in black and white, but he does react in black and white. His rash responses to trouble (often trouble caused by him) have always mimicked the first trial runs of the Ironman suit: explosive, unpredictable, untrustworthy. Bad guys are using my weapons? Destroy the weapons! My suits are a distraction? Blow them up in a Christmas light show! The aliens almost got us? Build an AI monster that can outsmart and outfight all of us! People died because we couldn’t save everyone? Hand the Avengers over to men in suits that can make all the hard decisions without ever leaving their desk chairs!

Finesse and discernment never his strong points, Stark leaves way too many questions unasked before sailing straight into the proposed UN oversight. He’d rather be controlled than self-controlled. “Whatever form that takes,” he says, “I’m game.”

Steve Rogers is the opposite. He knows the dangers of subjecting himself to a bureaucracy (a bureau-crazy) that could send him to wage the wrong wars and restrain him from fighting the right ones. Of course it’s easier to pass the buck up to the pencil-pushers, but clear in Cap’s mind is the fact that this would be abdication, not an answer. The UN’s regulations (named the Sokovia Accords after the near catastrophe at the end of Ultron) would relieve the burden of responsibility from the Avengers’ own shoulders, because if they aren’t in charge, they can’t be blamed. And Cap can’t have that.

Bigger picture, he also understands that saving the world doesn’t mean you manage to save everyone in it. Losing lives hurts, but the solution isn’t to wrap yourself up in puppet strings and donate the controls to the politicians; that way, more people are guaranteed to die. Steve Rogers, a natural-born protector and no stranger to the devastation of losing innocent bystanders as well as men in combat, is content with the team’s limitations because he knows that his only job is simply to do his best. That is all anyone can ever do. The Avengers aren’t God—and that’s okay.

Two years ago, I noted in my review of Winter Soldier that goodness has always looked a little too easy on the true-blue hero and that I hoped we’d one day get to see him honestly struggle to make the right decision. Civil War granted my wish. We did see a few more angles to Cap’s character in Ultron last year (where he at least admits he has a “dark side”), but it’s way stronger in Civil War, where Cap wavers and even—in a small but important way—fails.

Knowing the right thing to do has never been tougher for Captain America. “I don’t think he’s ever been so uncertain with what right and wrong is,” Chris Evans told Entertainment Weekly (December 11, 2015). We see this early on when Steve yields to peer pressure and comes within an inch of capitulating to the UN’s terms. Even after he’s settled on the right course, sticking with it proves monumentally harder than anything else he’s ever done. And personal failure comes when he misjudges the critical Bucky-Stark situation and reacts with a lie—presumably the first real lie of his life—in order to avoid more conflict with Ironman—presumably also the first time he’s ever backed away from a fight. 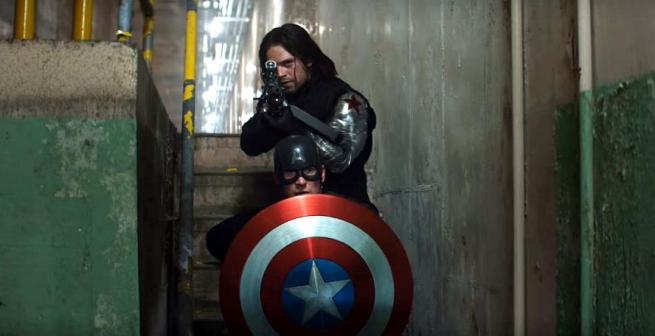 But he is a greater hero for having stumbled and yes, he is the film’s clear hero. Marvel has had a blast recruiting the entire social media world to side with either #TeamCap or #TeamIronman (keeping things light and entertaining), but the movie itself sides with Cap. The story’s moment of truth comes literally from a pulpit and gives Cap an unmistakable benediction: “Compromise where you can. Where you can’t, don’t—even if everyone is telling you that something wrong is something right. Even if the whole world is telling you to move, it is your duty to plant yourself like a tree, look them in the eye, and say, ‘No, you move.’ ”

The fallout costs Cap half of his closest comrades; it nearly costs him his life. Throughout the movie, I was reminded over and over of Dumbledore’s fantastic line in Harry Potter and the Chamber of Secrets: “It takes a great deal of courage to stand up to your enemies, but a great deal more to stand up to your friends.” What Cap learns, and what he proves: Civil war is terrible, but when all other courses of action have been tried and have failed, suit up with those fighting for freedom, even if you must cross swords with your brothers.

I do have a smattering of criticisms. The movie bites off a bit more than it chews and leaves a few corners of the political issue unexplored; the rightness of Cap’s conviction and the flaws of Ironman’s should both have been articulated a little stronger. And Daniel Brühl is underused as the creepy doctor. Marvel has yet to create a bad guy on par with Loki but Brühl should have come close: He has all the backstory he needs, he just wasn’t given the chance to flaunt it. 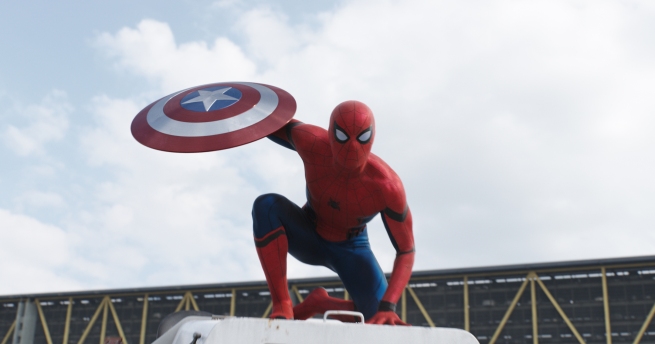 Also, superheroes may be tough, but exactly how many times can they fall from buildings or get buried under buildings or get punched in the face by buildings and not even slow down? The number of times Cap in particular gets thrown around is ridiculous. By the end of the movie, I wasn’t sure why the fighting was even over. The characters were so darn indestructible that the climax shouldn’t have really fazed anyone.

But overall, solid job. Young Tom Holland deserves special mention for using his meager 30 minutes of screen time to turn Civil War into easily the best Spiderman movie to date. And I can’t leave without taking my hat off to Black Panther who, after lurking in a dangerously under-appreciated way for most of the film, delivers arguably the best line of the entire 2.5 hours when he refuses to kill his father’s murderer in cold blood: “Vengeance has consumed you. It’s consuming them. I’m done letting it consume me. Justice will come soon enough.”

Captain America: Civil War delivers fantastic amount of party while carrying a crucial warning to our stupefied generation. We have acquiesced far too long to a government that strips its citizens of both freedom and responsibility. No more. Eat your popcorn and enjoy the movie, but pay heed to its instruction so that when real war comes—as it already has—you will know where you stand and can say with Cap’s same confidence: “No, you move.”

3 thoughts on “No, YOU Move: Why Every American Should be #TeamCap”