Imagine Flannery O’Conner made a movie.

My gut reaction walking out of the theater: Shock. The River Thief was shockingly funny, shockingly scary, shockingly grim, shockingly merry, shockingly bold with both good and evil. Every step of the tight, neat story (less than 90 minutes long) reminded me just how scandalous is our gospel. How dirty grace gets its hands. Redemption is disturbing. Forgiveness scalds. God stoops so embarrassingly low to love us.

I won’t rehash the plot (catch the synopsis here), just interact with some of my favorite elements of the film and why I encourage everyone to watch it. And not because it’s one of those cheesy faith films that “needs your support.” There are those, but N.D. Wilson’s River Thief (his first feature-length film) isn’t one of them. This is a legitimately good movie.

Note for parents: While the movie is technically unrated, I’d probably give a PG-13 for brief, hard-hitting violence, especially at the end. This is not a film to watch unedited with tiny children.

Now, here are things that stuck in my mind and I want to see more of in other movies, especially those made by Christians:

One of the first things you’ll notice is that this is a low-budget film. A couple scene changes felt a bit abrupt. The set is obviously far from infinite. But these limitations make the story more real, more raw. Everything you see is what you can do in a couple small towns with about $400,000. The story’s narrow scope gives us something we can relate to; not only do we feel like it could really happen, but aspirant filmmakers will also be encouraged knowing they can make it happen. You don’t need Chris Pratt and $90 million to create a spectacular movie. What you need is a shoestring budget, a gung-ho crew, and a staggering amount of hard work.

The cinematography is a treat. The Palouse has a lot to offer and, similar to Alejandro Iñárritu basking in the full glory of the Canadian Rockies in The Revenant, Wilson takes advantage of it. He turns the setting into a character in its own right. I will never forget that shot of the sunrise over the wheat, or the yellow sky backlighting that pivotal conversation between Diz and Selah. The inspiration: What’s in YOUR backyard? Go shoot a movie there.

I’m picky about soundtracks, but the musical score (some existing songs, some composed for the film) was surprisingly top notch. Beasts’s “Satan” is a particularly fine choice for the opening sequence.

Also typical of Wilson: Even the side characters were delightful. Very solid and true-to-life. I wanted to hang out with many people who appeared for just a few seconds: curmudgeonly farmer, bowling alley girl, jewelry shop guy, and especially limousine chauffeur and the hysterical Bubby. Everyone feels as if they’ve sprung fully developed from Wilson’s mind. (In fact, if you’ve read his children’s fiction then you’ve already met another Bubby as the hero in 100 Cupboards, only he has more time to arc.)

The dialogue was extremely tidy, to the point, and filled with quotables. Marty, you can tell, has spent a lifetime boiling his observations on life into nutshells of wisdom, little jewels to pass out and feed others. Selah has obviously been instructed by much of the same. Together, they supply some of the film’s best lines.

Note: The language will ruffle feathers. Wilson throws in a handle of hells and damns and an ass or two. Wait, how can it be a Christian film with cuss words? Spoken by good guys no less! Here’s why: You can’t haul a few four-letter words off to “never used by Christians” prison and throw the keys away. Nothing so easy.

As with guns, using these words takes wisdom. Wilson doesn’t sling them around in order to earn Hollywood street cred. He doesn’t use them in order to be seen as a “real” filmmaker. Every cuss word resonates because it was painstakingly chosen, said by the right person to the right audience at the right time. I challenge you to put your big boy pants on and deal with it. Or just read St. Paul in the original Greek.

Aside for a few seconds here and there, the acting utterly convinced me. Deadpan Tommy Cash gives the story its bedrock. Raleigh Cain pulls off a challenging amount of conflicted emotion and stays consistently likable—key to the story if we’re to believe Diz would pursue her to the end of the line. Paul Johannson and Bas Rutten gave me chills. But the real star is Joel Courtney. He carries the weight of the film on his shoulders. It lives or dies with him. Others could damage it badly, but he is especially responsible for whether it goes out with a whimper or a bang. And it goes out with a bang.

The climax is a bombshell. I was utterly floored. I did not see that coming. At all. I knew Diz would have to be redeemed, of course, but I thought he would rescue everyone and win the girl or, at most, that Marty alone would die. But once I recognized Calvary, of course I knew it could not be any other way.

Marty is simultaneously the fallen son of Adam, representing all of us, and Christ: “For this I was born: to testify to the truth.” The executioner is clearly Pilate. “What is truth?” he asks, and washes his hands of it. There’s even an element of the Roman guard in Saul, the crooked cop: the man who realizes too late whose son he just had a hand in murdering. And Diz is the thief on the cross, saved at his last breath. His own crimes have put him in this place and he dies next to the man who dies saving him. 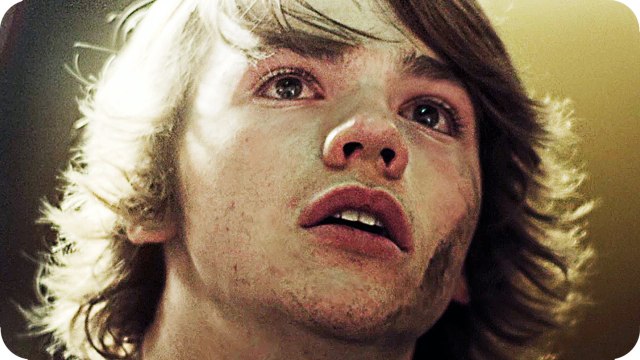 You can glean from The River Thief many of the themes promoted by Christian films, but where others preach, River Thief shows: repentance, forgiveness, redemption, resurrection. The scandalous grace throughout the movie will probably offend many Christians who aren’t used to being confronted with their own lack of generosity or willingness to forgive. Expect to feel uncomfortable. I know I did.

I was struck most by the theme of gratitude. Readers of Wilson’s Notes From the Tilt-A-Whirl and Death by Living will recognize this as a thing of his. Life is a gift. Every life.

Some steal life; Clyde has killed often, Saul attempts to kill Diz throughout, and Diz’s mother tried to abort Diz every way she knew how. Some squander and waste life like Diz, drifting along, bitter at a father he never knew, taking from others in order to commandeer some sense of control over his wretched existence.

But others are like Marty who lays his life down for others through generosity, even generosity that gets him killed. Because although it is impossible to say thank you enough for the life that beats roughly once per second through your neck, Marty understands that saying “my life for yours” is the best way to start.