I wasn’t interested in Rogue One (lame trailers had something to do with it; not being an addict of the Star Wars universe had something else) until I heard that it was basically World War II in space. Then I was hooked. And on that front, the movie pretty much delivers. But to keep running with this metaphor, Rogue One had every right to be D-Day: magnificent, decisive, shockwaves everywhere. Instead, it’s more like the Siege of Bastogne in the Battle of the Bulge: gutsy but tragically understaffed. Especially in the writer’s department. (Even with Tony Gilroy lending a veteran hand to the script.)

Here’s the deal. Act III is amazing. But if I had gotten to know the characters better, the story would have been 10 times better and I would have left the theater fizzing. There’s no real backstory on either of our primary heroes: Jyn (Felicity Jones, clearly capable of more if you just watch The Theory of Everything) or Cassian (Diego Luna). Well, Jyn does have moderate backstory, but it’s all plot backstory, not character backstory, and even when there’s plot backstory, she’s given not one but TWO partially developed father figures, which just gets confusing. She’s plenty plucky but we don’t know her motivations, goals, fears, internal conflicts, nothing.

Neither with Cassian—a flawed and fascinating man, if anybody could bother to introduce us. Why is he fighting with the Rebellion? How did he get recruited when he was six years old? What kind of man shoots an ally to save his own skin? Why does he agree to assassinate someone, no questions asked, and why does he then refuse to pull the trigger? What transforms him throughout the story? Dunno, dunno, dunno. The movie frustratingly ignores almost everything cool about Cassian except his jacket.

Same deal with the imperial pilot (superb, but too shallow), the blind martial artist-priest dude (amazing!), and his side-kick muscle with the hair. I felt like I knew K-2SO better than any of them and he’s a robot recently wiped completely clean, for Pete’s sake. Rogue tantalizes us with fantastic characters only to kill them off without letting us become friends. 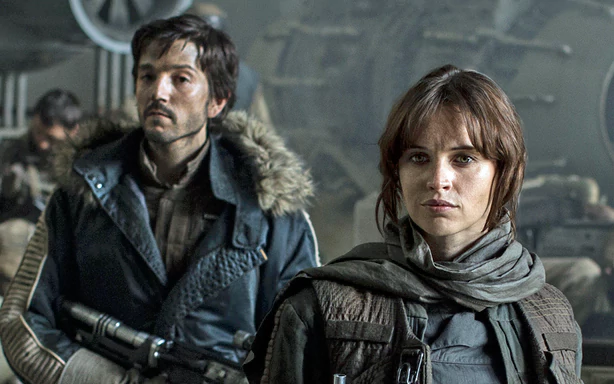 As for the plot itself, the Rebellion’s plan to find the defecting imperial pilot so they can find Jyn’s surrogate father so they can find her REAL father so they can find the big bad weapon is way too shaky. Like total knee-replacement-surgery shaky. Rebellions might be built on hope but they need better intel and sound strategy if they’re going to last a week. And by the way, any rebels crazy enough to act on such a rickety plan would also believe they could take on the bad guys in Act III instead of turning tail (as they do).

Michael Giacchino does a fantastic job with the music, especially on such short notice. Why on earth did they get Alexandre Desplat for the first round? Listen to Giacchino in any film; he tips his hat to John Williams every chance he gets and is unquestionably the best choice for any film in the franchise if they can’t get Williams himself. The track “Your Father Would Be Proud” is particularly fine.

Darth Vader’s cameo invigorates the entire film. His presence doesn’t feel forced (as it easily could have) and in less than five minutes, he is every bit as grand, ruthless, and terrifying as he is in the entire movie of The Empire Strikes Back.

And as I said in the beginning, the climax really is quite super. By now the dubious setup doesn’t matter and the movie is allowed to do what it does best: fight for all its worth. The WWII vibes reach a peak as uniforms, tactics, call signs, comms towers, beach warfare, and heroics reminiscent of Saving Private Ryan take over the screen for a 30/45-minute crescendo. As far as relating it to the original movies, Rogue is closest to Return of the Jedi in terms of feel, if Jedi were as serious as it should have been. 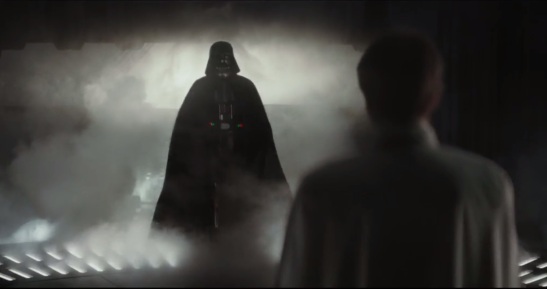 A final point in its favor. Rogue dovetails fabulously with the original trilogy and passes the baton straight to A New Hope—its greatest strength, in my opinion. Certainly it makes the fans happy. Better than that, the neat tie-in allows Rogue to prove that death is not the end, sacrifice for the right cause is never fruitless, and some defeats are the seeds of victory. A handful of incredibly brave soldiers volunteer for an impossible mission and give their lives because they believe it’s worth it even though they don’t know the end of the story—but we do. We’ve loved the story for forty years. This is great encouragement for us when our own fights feel like lost causes and we don’t get to see the final victory with our own eyes. Believe that it is coming.

A climax that wows despite the lack of footing—that’s Rogue One.

P.S. Can I have Cassian’s jacket now?

One thought on “Rogue One: A Climax in Search of Footing”