Not the winner: La La Land

Significant unseens: Arrival, Beasts of No Nation, Manchester by the Sea

Synopsis: Conscientious objector Desmond Doss serves in the Battle of Okinawa but refuses to kill anyone or carry a rifle, and becomes the first man to receive the Medal of Honor without firing a shot.

If Mel Gibson were a composer, he’d be Beethoven, and Hacksaw Ridge his Ode to Joy. Brash and startling right out of the gate, the two-hour war drama then eases up for a surprisingly slow, leisurely build before unleashing an almost never-ending climax, complete with (perhaps) too many cymbals. But the cymbals are hard to argue with. Hacksaw Ridge wields pathos at times like a scalpel, other times like a cudgel, and totally wins 2016.

Mel accomplishes two things I never expected. First, he makes up for a lengthy, scandal-laced absence with nearly his greatest film of all time, certainly his best since Braveheart; second, he creates a compelling and sympathetic movie about a Southern-drawling, God-fearing, gun-shy soldier (just one of those three would be hard!) that emboldens us to lay down our lives for others better than many traditional war movies featuring far brassier heroes.

In both feats, the odds were stacked against him. Mel’s comeback as a director is profound and Hollywood needs more films like Hacksaw Ridge. 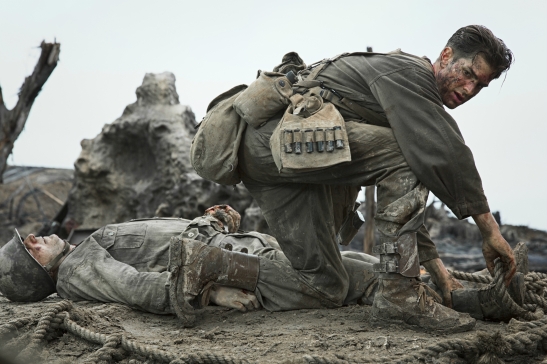 My quibbles focus on Act I—the opening 30 minutes or so.

1) The credits should say based on a true story. Randal Wallace and his co-writers add fictional characters and remodel a few scenes to help shape the narrative and explain Desmond Doss’s motivation for avoiding violence. These changes feel legit but I feel cheated, discovering afterwards that one of my favorite soldiers never existed and that one of the key scenes clarifying Doss’s gun-aversion was, well, not quite true.

2) The opening scene is way over the top. Dropping us in the middle of the battle with an overwhelming amount of napalm and slow motion and characters we don’t know or care about…. It’s jarring and off-putting.

3) The next several scenes (featuring Doss’s boyhood) are clumsy. The movie has several false starts—like me learning to drive a stick shift. Similar to Unbroken, the film doesn’t find its stride till Act II, and then all is forgiven. From here to the end, it’s a home run.

Violence, Romance, and Other Things Hacksaw Ridge Gets Right

Let’s talk violence. Hacksaw Ridge is surprisingly restrained—for Mel. The violence is graphic and shocking but not gratuitous or punishing. To compare it with his other films, the explicit gore is a step back from The Passion and Apocalypto but somewhere north of Braveheart. To compare it with other war films, Hacksaw Ridge is probably closest to Saving Private Ryan with its close-ups of entrails and head wounds, although not on the same scale. American forces numbered 34,000 on Omaha Beach and an estimated 3,700 were killed; the battle in Hacksaw Ridge is but a fraction of that. Consequently, the bloodshed is less wholesale and feels more personal, similar to Band of Brothers or Black Hawk Down.

The love story is effortlessly charming. A couple liberties were taken with the timing (for example, Doss didn’t miss his wedding because he was denied a pass to leave camp, but was already married before going on active duty), but together Andrew Garfield and Teresa Palmer are kind of the cutest and they make chaste look desirable. Not easy!

Speaking of Andrew Garfield, the casting was top notch. In a crowd of Brits adopting American accents in 2016 (Benedict Cumberbatch as Dr. Strange, Tom Holland as Spiderman, Martin Freeman as Everett Ross, Charlie Cox as Daredevil), Garfield’s Virginia twang is the best. Filmed entirely in Australia, the film also boasts a largely Aussie cast with the likes of Sam Worthington, Hugo Weaving, and Luke Bracey, not to mention Mel’s doppelgänger son, the 25-year-old Milo. Vince Vaughn is an unlikely (but appropriately amusing) choice for drill instructor and unless I missed someone, he is the only big-name American in the entire film.

The music was incredible (especially the track “Rescue Continues”). I’m sorry Mel’s traditional music partner James Horner passed away this year but I’m also grateful the soundtrack fell to better talent in the hands of Rupert Gregson-Williams, composer of Hotel Rwanda (also, cool fact: brother of Harry). Sitting in the theater, I could hardly believe my ears. A lot of battle soundtracks are dissonant, chaotic, and tuneless, and I was very conscious of wondering, HOW can they possibly deliver music that fits this incredible scene I’m watching? But Rupert Gregson-Williams does it. (And then overdoes it. If Mel insists on ending the film with his hero gently arriving from heaven in a weird, reverse Ascension, then the music ought to pull back. Gushing strings just make it worse.)

I grew up in a gun family. A military family. My dad, uncle, cousin, and both grandfathers have all served. It drives me nuts when people think guns are evil and I have ZERO patience for people who can’t distinguish between killing and murdering. So I was blazing with curiosity over how in the world Gibson could pull off a war movie about a guy who refused to carry a rifle and couldn’t bring himself to take a life. I was confident I would like the film; I just couldn’t possibly see how.

Here’s how Mel walks the tightrope.

Contrary to all the slapdash plot summaries of Hacksaw Ridge, Desmond Doss is not a pacifist. He believes the war is right, that American men are justified in taking up arms, that he would be wrong to stay home. He simply cannot kill. Nor carry a gun. His commanders accuse him of cowardice, of hiding behind religious beliefs so that other soldiers do the dirty work. When asked how his contradictory beliefs fit together, Doss replies he doesn’t know the answers to questions that big.

Throughout the movie, however, those reasons become clear.

Doss may not be a theology whiz but he knows his own heart. He almost killed his brother when they were boys. He nearly shot his father to protect his mom, and “in his heart” he did kill him (a scene largely invented for the movie). Because of traumatic experiences and simplistic beliefs, there is no difference between killing and murdering for Private Doss. He cannot trust himself. So he promises God he will never touch a gun again. Rash or not, he sticks to his word—a resolve his fellow soldiers eventually respect.

And then there’s the simple fact that Doss doesn’t need a weapon to show everyone how to win a war.

The movie is being touted as anti-war. Nothing could be further from the truth. It is as anti-war as Doss was himself, which means not at all. The movie is a testament to one man’s courage simultaneously despite and because of his convictions. How silly to think that it’s okay for other men to kill in war while you keep your hands clean, right? Yet Doss does. Others may be called to take lives, but he feels explicitly called to save them, and he does a better job at that than many “tougher” soldiers are at killing.

Someone snarks early in the film: “You don’t win a war by giving your life.” Oh yes, you do. Killing the enemy is not the best or primary weapon because merely winning the war is not the point. If it were, nuke ’em and go home. The best and primary weapon is self-sacrifice. Though Doss is muddled in thinking he cannot ever be justified in killing, he does understand that the key to ultimate victory is not taking life but giving it. Laying down his own for others. And that he is manifestly prepared to do.

A lot of war movies leave me jittery and anxious to copy their bombastic heroism even when there’s no way I’ll be called to do so. Doss’s heroism, on the other hand, translates readily to everyday life. I never thought I’d say this about someone who refused to touch a gun but Desmond Doss is one of the most lion-hearted, selfless men I’ve ever seen. The last 45 minutes or so feature wave after wave of unbelievable bravery—from a single man, acting alone. I have never felt such sheer joy while watching such a harrowing battle. Can I live a single day thinking about myself as little as he did about himself? Because that is my new goal. This is valor for men and women, old and young, warriors and civilians, because this is Christ.

If Mel, as a good Roman Catholic, is trying to submit penance for his wildly distasteful shenanigans over the past several years, then I’d say, as a good Protestant, that of course he can’t. But thanks anyway. Hacksaw Ridge is enough. Mel is back—hopefully for good. God is still using a flawed vessel for great glory.