Why I Love ‘Bodyguard’ (no major spoilers)

All who are sick of today’s typical squalid, godforsaken cop show (Fargo, The Wire, True Detective) should take note that a breath of rare air has entered the room. If you’re craving a clever mystery that doesn’t make you despise the hero (and yourself), that doesn’t hook you on antidepressants because the battle between good and evil appears so damn futile; if you feel it’s high time for a show that convicts as vigorously as it inspires, that leaves you better than it found you—good news, it’s here.

Jed Mercurio’s Bodyguard, still fresh on Netflix after smashing records in the UK, stars Richard Madden (of regrettable Game of Thrones fame) in a twisty political drama with enough intrigue and red herrings to propel a much longer series and, unfortunately, enough sex and nudity to remind us that Madden caught the world’s eye as Robb Stark first.

And it’s the most valuable miniseries I’ve seen in a long, long time.

I don’t trust Netflix recommendations in general—just because I watched an episode of The Crown doesn’t mean I’ll like The Tudors!—and I will reject a movie in five seconds flat. (I quit Limitless after the heinous opening shot alone.) So when Bodyguard smoldered on “top picks for Gwen,” I grudgingly decided to give it the 30-second test.

Thirty seconds, I was hooked. Five minutes, I knew I was loving it. Episode two, I was pleading with the director to clean up the skin—just stay out of the bedroom, will you? Episode three, I quit in disgust for two days. Could Mercurio possibly turn this ship around? Suspicious, I crept back in. Episodes four through six heated my dread to a full boil (it didn’t help that I’d caught reports of a bad ending) till nearly the last second, when the story arrived safely home to my stunned relief.

Bodyguard breaks the mold. Disobeys orders. Tramples the god of nihilism underfoot. Not that you see it coming. All the ingredients of a joyless police drama are here: A psychologically damaged, deeply flawed cop—plagued by marriage troubles and implacable demons from his past—gets mired in overwhelming evil. He becomes more like the villains he resists every day. Corruption without appears as unsolvable as corruption within. Good will never win, even if we knew what it looked like. Cue the antidepressants.

But unlike its smutty compatriots, Bodyguard doesn’t drag you through the filth for no reason. Mercurio still ought not to have showed the filth, but the fact of the hero’s fall is integral to the story’s unique power. To be honest, my anxiety (am I getting suckered into something irredeemably nasty?) was critical to Bodyguard’s violent impact. So I’m sorry I must ruin the suspense by assuring you the show ends well, but otherwise you’d probably drop it at the midpoint.

I’m here to tell you it’s worth it. Keep going. Skip episode three at 35:56 (beware multiple scenes in eps two and three, but this is the only R-content you don’t see coming), skip the rest of this review (spoilers!), and watch Bodyguard—the story of one fool’s descent into hell…and back again.

Budd is quickly torn between duty and beliefs…and a thorny romantic attraction. Will he turn from protector to lover to assassin? Surround this complex couple with a host of unreadable side characters who each have motivations for the plot’s multiple nefarious deeds, and you’ve got a riveting conspiracy thriller in which no one can be trusted—including (especially) the hero.

Man of the Hour

Bodyguard wins on all technical fronts. The wicked pace is what you’ll notice first. The show opens in media res with an incredibly tense, agreeably melodramatic suicide-bomber standoff that doesn’t break—and you don’t breathe—for over 20 minutes.

Dialogue is solid. Characters are complex. The plot is pulpy and extravagant but we don’t mind. For one thing, its issues are either eternal (truth, loyalty, courage, freedom, discretion, marital faithfulness) or of fiery relevance today (terrorism, national security, government snooping, individual liberty, personal privacy, Muslim profiling). And for another, the story’s sensational twists and turns flat don’t matter, thanks to the sympathetic hero at its core.

Great acting reigns on all sides. As the power-hungry Montague, Keeley Hawes is at once confident and ruthless, yet vulnerable. Two of the only straight shooters in the entire show are detectives Sharma and Rayburn, admirably portrayed by Ash Tandon and Nina Toussaint-White as both tenacious and stoutly likable. Sophie Rundle also deserves special kudos as Budd’s sweet, estranged wife, not without her own faults. But the show’s unquestionable king is Richard Madden.

Bodyguard banks on the Scottish 32-year-old’s skill for invoking extreme empathy despite acute unreadability. We’re never quite sure of the state of David Budd’s mind. In public he’s a bulldog; in private he’s a mess. Half the time we’re in his POV, the other half we’re observing him, wondering what the heck he’s up to. He withholds crucial evidence from us, not just his family and colleagues.

The result is a sort of psychotic split. We feel Budd could be deranged: sometimes living his life as a free agent, other times dream-watching himself make horrible decisions. Is it just PTSD, or does he have a blacker history? David Budd could very well be the show’s greatest villain.

The fact that we like him anyway is a testament to Madden’s extraordinary magnetism and his mastery of every volatile emotion in Budd’s complex psyche. And of course, hopelessly attractive to Americans everywhere is Madden’s native accent which just might send you scrambling for subtitles so you don’t miss a word. In every way, at every turn, Richard Madden, much like his character, proves himself the man of the hour. 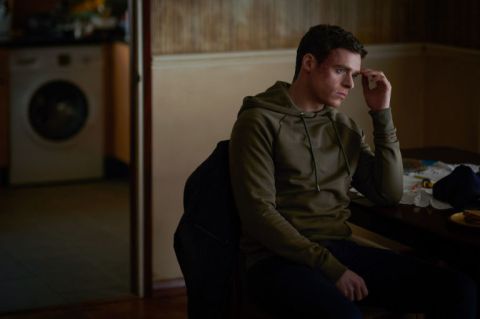 Another triumph I can’t ignore: Though grappling with a swarm of hot issues, Bodyguard dodges the obligatory PC crap. Most notably, it doesn’t “empower” women (the majority of female characters are surprisingly feminine, even the cops) or seek to “understand” Muslims.

This last point is what got Bodyguard the complaint of a “clumsy” and “disappointing” climax. It also earned Mercurio accusations of Islamophobia for perpetrating stereotypes. Hogwash. So the criminal mastermind turns out to be a Muslim woman. How dare we! I mean, we might as well make a movie where the German suspect turns out to be a Nazi. Outrageous.

In the first half, Budd takes a wrecking ball to his life. He’s having a monstrous affair, he could fail any minute to protect his client, he might even kill her himself. In the second half, he pays for his sins. And pays, and pays. If he thought his past had haunted him, he is doubly haunted now. The pit he falls into is the pit he dug for himself.

Mercurio has been praised by reviewers and veterans alike for accurately depicting, through Budd’s mental and emotional death spiral, the potential nightmare of PTSD. And it’s true. Though we never find out exactly what traumatized Budd in Afghanistan, he has obviously seen hell. But it would be a mistake to blame his character failings on that.

PTSD is no scapegoat. Psychological scars were slashed by war; Budd’s moral holocaust is all his own. PTSD simply reveals who he really is. Proud. Headstrong. Blind. The suicide vest in the finale is more than a recurring prop: it’s the physical representation of Budd’s spiritual self-detonation all along.

Down to the last minute, I expected the story to collapse in a tragic Shakespearean fit. The possibilities for derailment were legion. Even if Budd didn’t show his hand as the villain (or kill himself), he could learn his lesson too late, lose his wife and kids forever, and join cinema’s sorry rabble of moping, drinking, world-weary cops. This sense of jeopardy was Mercurio’s intent. I’m glad he didn’t go there. As a cautionary tale, Bodyguard would have minimal value, I suppose—and a million angry fans.

But Mercurio executes a miraculous turn. With stunning success. I could not believe my eyes. Driven to rock bottom, David Budd is redeemed and set on the path of complete confession, repentance, forgiveness, and restoration. This is eucatastrophe at its finest. A term coined by Tolkien, eucatastrophe (at least in film) usually occurs in terms of physical rescue. I’ve never seen it as spiritual redemption. David Budd doesn’t name the name of Christ, but this is grace nonetheless—truly that “far-off gleam of evangelium” that Tolkien so loved. Welcome home, son.

Fragrantly gratuitous sex and nudity keep Bodyguard from being entirely wholesome, but it remains an overall gem. I’m still shocked it’s here. Yes, you’ve got to admit its success derives partly from being set in such high relief against the toilet of modern television. Without a backdrop so black and grimy, Bodyguard would not shine so bright. The explosive gratitude you feel at David Budd’s resurrection is hence a little out of proportion. It’s like watching a gymnast stick an easy landing after one hundred gymnasts broke their ankles on the same simple routine. It really shouldn’t be this hard, you think.

But by the same token, Bodyguard deserves kudos for pulling out of the nosedive when so many others kamikaze in the dirt. The common grace God has extended to Jed Mercurio deserves our hearty thanks. And the show deserves your attention (with a finger on “skip”).

After watching David Budd so long, you will find yourself watching yourself as you walk away. Bodyguard trains the camera on the individual viewer like a mirror. Is this the right choice? This, the thing you’re doing right now. Did you just blow another opportunity to work on that relationship? Did you bury that sin instead of confessing it? Are you avoiding the dragon instead of cutting off its head?

Bodyguard is no mere engrossing thriller. It’s a compelling case for doing the right thing. Put on humility. Love your family. Confess your sins. Ask forgiveness. Stay the course.

When you finish, the only show you’ll want to watch is Bodyguard, again. Which I did. Twice.