I tried the first three mins of Outlaw King and quit. Nothing in the set, music, dialogue, cinematography, characters, or scenery made me want to stay and EVERYTHING made me want to run away. Primarily Chris Pine’s hair.

NOTHING SHOULD MAKE ME WANT TO RUN AWAY FROM SCOTLAND, Netflix.

Outlaw King is a coward. It takes no risks and picks no fight. It’s as harmless as a weak chin. It is boring, shapeless, unstable (no fault or quality is consistent), but primarily LAZY. It waves at a brilliant opportunity as it sails by. Here’s the chance to inspire the world with one of freedom’s greatest triumphs: we need a movie about Robert the Bruce. But despite sticking pretty close to history (woodenly so) and offering two exceptionally strong side characters, Outlaw King leaves you almost wholly unchanged…except you want to slap it silly (won’t take much) and get on with your life. 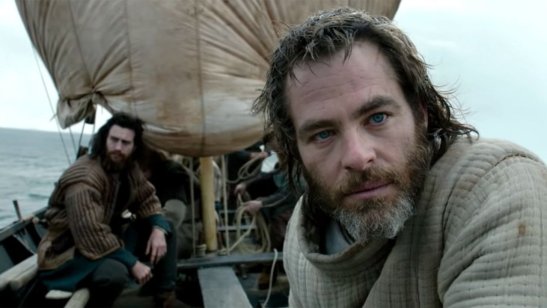 Everybody’s talking about how Outlaw King scores points for historical accuracy (at least compared to Braveheart), but that’s like saying a Christmas dinner of kale and quinoa scores points for nutrition. Who cares. You just ruined Christmas. With no bagpipes and not a tartan in sight, iconic Scotland is gone. Great gusto in plot, pacing, characters, music, and scenery is vital to reinvigorate any movie that flips so many of our (anachronistic) expectations on their head, but Outlaw King offers none.

Plot and pacing have zero horsepower. Characters are meh almost to a man. The music, when it deigns to show up at all, wouldn’t rouse the world’s lightest sleeper. Scotland herself with all her feral beauty is largely ignored.

Chris Pine is a train wreck of miscasting. He screams American Boy Next Door and can’t unscream it. No attempts are made to atone for his perky Yankee face by giving him a sufferable haircut or even a proper accent. His “brogue” would melt on wet pavement. This Robert the Bruce is Bob the Boring—a fault shared by Pine for his room-temperature performance (his attempt at the Strong Silent Type??) and the writers for their total lack of interest in making the king of Scots a real person. Robert’s depth of character wouldn’t drown a half-grown gnat. Why does he surrender? Why does he then rebel? What does he believe in? How does he inspire an army when he isn’t…inspiring?

The bad guys are equally bland (except maybe Sam Spruell—your token sneer—as Aymer de Valence; at least he inspires disapproval). Stephen Dillane as Edward I is a major whoops. Subtlety and magnificent understatement his specialty (as seen in Greatest Game Ever Played), here it’s just…soggy. Legendary warrior-king Edward Longshanks was the Hammer of the Scots; Dillane is aggressively gray and forgettable. No power, ferocity, or kingly command. This casting choice was pure unkindness to Dillane.

The Prince of Wales (Billy Howle) is flat primly weird. Braveheart may have taken liberties in pushing its sniveling pink prince to the extreme, but at least that prince was fun to watch. Howle’s walking, talking bad hairdo (another one!) is barely worth the energy to dislike—despite bursts of rage and insecurity.

Even the violence (much talked of) is chintzy and spastic. The battles are mostly mud. No problem there; we don’t need to see hacked off limbs and split skulls. But suddenly stringing up a man and gutting him like a deer so his intestines spill out in a slippery heap is tawdry and amateur. Cheap shock. This fit of clinical realism doesn’t serve the story or root us in harsh medieval times, it’s just a splattering lesson in human anatomy.

Then there’s nudity and a bed scene. The easy-to-skip sex is stupid, but Pine’s full-frontal nudity (way over-hyped) is just buffoonishly unnecessary. You can only snort. Really, Netflix?

I did like Black Douglas (the testosteronic Aaron Taylor-Johnson) and Queen Elizabeth (Florence Pugh, believably our next Jennifer Lawrence). Black Douglas would steal the show if the awesome Elizabeth hadn’t stolen it first. Here’s a man to inspire men: loyal, courageous, unstoppable (sometimes to a fault). And here is a woman to inspire women: unbelievably tough, smart, feminine, faithful. I could watch her all day.

Outlaw King is thin soup with a few valiant turnips of truth and fantastic supporting characters floating about. I suppose you might watch it for the turnips.