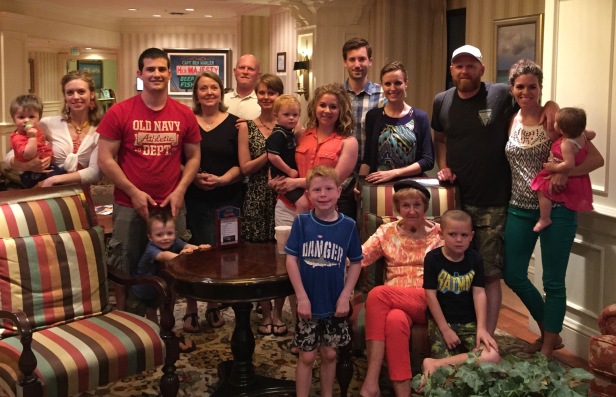 Hello and welcome to GMBurrahobbit.com. What’s a burrahobbit? A burrahobbit is me. I was born a Burrow (Gwen Michelle) and it wasn’t long before my sisters discovered I was also a hobbit, and there you have it.

I love words—living words, spoken words, written, read, sung, and heard. I’ve been writing since I was seven and don’t plan on stopping any time soon. I also love books, movies, theology, history, art, and fun-poking. That, in the shell of a nut, is what this blog is about. But it’s turned out to be mostly movies. (I’ve seen over 600 just in the past nine years, and am chipping away at the mountainous task of putting them all up online.) If you’re wondering why I spend such a disproportionate amount of time on films instead of books, it’s not disproportionate, it’s just all on my blog whereas my books are all over on Goodreads.

I was born to military parents in Nürnberg, Germany, for which reason I cannot donate blood to this day. It seems the blood collectors are highly sensitive about the idea of transferring mad cow disease, and they are particularly suspicious of military hospitals and the year 1984. Of course, that doesn’t alarm me at all.

After coming back to the states as a forever disqualified, possibly contaminated though perfectly ignorant nine-month-old, I lived in Atlanta for a spell (don’t remember any of it) before moving to Tallahassee, Florida, along with half the nation’s sweat, mosquitos, and poison ivy, of which I took more than my fair share.

My life in the panhandle area shaped me in two everlasting ways: it confirmed me as a Southerner, and it instilled in me an awareness of crime—and fighting it. I witnessed an explosive fist-fight in our own mall, a man was pistol-whipped a few streets from our house, and we lived less than two miles from Florida State University where Ted Bundy had assaulted four girls, butchering two, less than ten years before we got there. On top of that, my father was an assistant US attorney, which meant he made a lot of drug dealers mad. I remember the photo of one man in particular to whom we were never to open the door; my dad kept the picture on our refrigerator.

That probably sounds all very exciting, but it was just normal and didn’t last terribly long anyway because in 1995, we packed up and drove across the country to Idaho where humidity is low, crime is low, hicks are high, and pretty much the most violent thing I’ve seen so far is a cow’s leg twisted off at the knee and lying (still hoofed and hairy) in the drained canal at the edge of our property.

I am the second of five girls, two of whom are married and raising little warriors. My father, Alan, whose pithy and insightful blog you can find here, has finished chasing sinners in the courtroom and is now busy chasing them in church. He is the pastor of The King’s Congregation in Meridian, ID, where we are known for being tiny and singing big. My mom has kept everyone fed, clothed, and alive for over 30 years. She is the magnet that draws us all home.

I was home-schooled K-12 and completed three years towards a Bible degree at Whitefield College before starting almost completely from scratch at New Saint Andrews College in Moscow (way up Idaho’s chimney) where I hustled through my liberal arts education in three years, and then assisted first N. D. Wilson and then Doug Wilson in the freshman rhetoric class for another three years. Now I work as the marketing ops manager & writer/editor at EMSI and divvy up my free time between writing, telling stories to my nephews, and going on adventures with sisters and friends.

I’ve almost fallen off a cliff (and was caught by a guy hanging onto the rock with one hand), I’ve been broadsided by a car going 55 miles an hour, I’ve killed two gophers with a shovel, and I’ve accidentally carried four lethal weapons (including my .45 and not counting the pepper spray) into the courthouse and thence into the jail. (No, I wasn’t one of the inmates, though I was hoping to get a look at one.) I like running, Reese’s pieces, thunderstorms, dogs (German Shepherds), cats (if they’re big enough to kill me), and singing tenor as often as I can get away with it.